Friends Sites
sv Soggy Paws' Blog
sv Ursa Minor's Blog
Tuesday, September 11, 2007
28 August – 13 September 2007- Musket Cove Summer Camp for Cruisers
I would never in my wildest dreams have imagined that we would still be at Musket Cove two weeks after Uncle Bill left. And what's more, we will be here two MORE weeks! Usually, we are not big joiners, preferring to slink away to some uninhabited cove as we did at the start of the season when we went west-about Vanua Levu rather than follow the crowd to Viani Bay. But, here we are, in the midst of a group scene the likes of which we haven't seen since Trinidad! It's all about momentum, and I guess our Musket momentum started with a resolve to start walking in the mornings. It's easy here because there is a dinghy dock, so no struggling with shoes and socks and sand! The island is ideally laid out for the endeavor with dirt roads leading up to the ridge above the resort where the walker is rewarded with panoramas in every direction, including, of course, over the anchorage. Along the ridge are also the first homes in Musket Cove's residential development, all handsome and high-end -- stimulating for fantasies in the "what I would do with my lottery winnings" department. From the ridge road there are about four turnoffs leading to distant corners of the island, all of which we have explored. Sometime during the first week of walking we met Tom of the catamaran Quantum Leap. The next day we joined up together with Tom and his wife Bette Lee (working herself back into this after a hip replacement), and since then the contingent has grown. We spend about 90 minutes a day at this. We are feeling very virtuous.

In addition to physical momentum there is social momentum, and on that front it seems that we have stumbled into the hands of a full-fledged organizer. Robin of the Voyage catamaran Endangered Species has organized day-trips, dive trips, dinners and potlucks which have filled up our calendar in a way we had not anticipated. First we went diving with Robin and her husband Rick, a long run with four of us and gear in their dinghy out to a fairly dramatic pinnacle where the current made us think twice about going out again without a surface watch. Two days later Robin put together a gang that filled three dinghies for a run around the corner to a backpacker resort called Funky Fish for a great lunch overlooking the acrobatics two fabulous kite surfers making the most of the 20+ winds. Lunch was followed by a beer-drinking/snorkel stop at an offshore sand motu that uncovers with the tide. Shades of Beach Blanket Bingo! 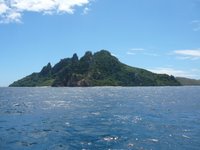 Two days after THAT was her real pièce de resistance: A boat tour of the further Mamanuca islands. Spoilsport that I am, I couldn't imagine why people with their own boats would want to PAY to go on an island tour, but sure enough on Monday she managed to line up eighteen of us. And what a blast the day was! Despite piping winds over 20 knots, our aluminum boat with the two massive 220hp outboards took us on a high-speed ride all around islands that we now see really don't have anchorages for us to stop in! We stopped once to snorkel a stunning reef of perfect hard corals and then made a pass by the island on which the great Tom Hanks' movie "Cast Away" was filmed (came home and watched it again that night, and sure enough, it's the one!) before whipping around several more to our lunch stop. 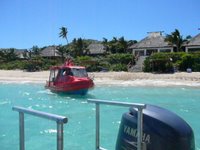 Our destination resort (I am mortified to admit I never did get its name!) was the least tropical looking of any we have seen, with modern white structures and a stunning infinity pool that just drops away into the blue of the sea. 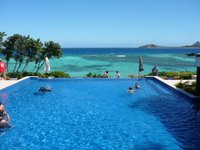 The food in their stark white restaurant, however, was unexpectedly fine. I had a salad of octopus and feta cheese with mounds of fresh greens and was amazed when the advertised octopus was not pieces but was instead a veritable flock of tiny octopi that you popped in your mouth whole! Not for the squeamish! With the wind actually increasing in the afternoon, we voted to forego any more snorkeling efforts and settled instead on stops at several MORE island resorts (of which I pretty well lost track) at which we all mixed and mingled and got to know one another better over chilly beverages. This part of Fiji definitely takes the world prize for the number of resorts per square foot of land. Every turn reveals another! And business doesn't look bad!

You may remember that Don and Bill bought a dive package the first day here. Unlike many resorts, the Musket Dive package can be shared by all the crew members of a particular boat. Don and Bill used up only two dives of the fourteen that first day, so Don and I have also had to fit in some scuba diving. The day after our dinghy trip with Rick and Robin, we went out on the Subsurface boat with three divers collected on the way from various resorts. This was the first two-tank dive (two dives, one after the other) we have done in a long time. Fortunately for me, most of the sites around here allow me to have a good dive while keeping to my modified depth range (max 50'). Our two dives were as different from one another as the two dive leaders were. The first leader, a man probably in his fifties, never once looked around for his divers, while the second after specifically saying that a dive is not a race, took off and left most of us in the dust. The first dive offered three "pinnacles" – more like three mounds – bedecked with large sea fans and many multi-colored crinoids (a species of feathery starfish that perch on coral to filter feed). Up shallow, I swam over a nice-sized turtle on the reef-top that everyone deeper missed. The highlight of the second dive, a shallow plateau with patch reefs, was memorable for the live Triton Trumpet shell, several small stingrays with blue spots, and lots of table corals. 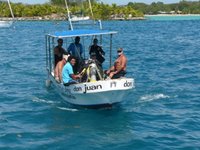 That was the only two-tank trip we've taken, and it was also the last open boat we've taken. Since then the indefatigable Robin has managed to get the dive shop to run a special afternoon boat for our expanding gang of cruiser divers! This is ideal for us. A single dive to a destination of our choice, all with our own friends. Such a deal. Unfortunately, most of the dives we have done have been pretty average. This part of Fiji does have some nice hard corals, despite predation efforts by the nasty crown-of-thorns starfish, but the fish life is depressingly thin. For example, we did a striking afternoon dive on a vertical wall where there should have been a steady parade of pelagics, yet the open water to our right remained absolutely empty!

And as if all that wasn't enough to wear us out, we are also continuing to play with our young friends Tricky & Jane on Lionheart. Jane, a former competitive swimmer, has been teaching Tricky how to swim laps properly in the resort's pool, so Tricky has taken on giving Jane, me, and…drum roll…even Don WINDSURFING lessons. With the resort's very reasonable hourly rate on boards that are nearly as wide as an aircraft carrier, these efforts have actually been quite successful. Who'da thunk it? 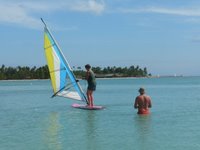 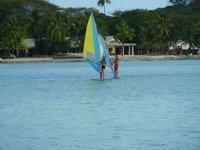 And finally, in an effort to see how many muscle groups we can shock, we all played golf this morning! Yes, GOLF! Behind the Plantation Island Resort on the other side of the runway, is a little 9-hole course. For $26F (About $15) we each got a full set of quite nice clubs, a pull cart, three tees and three balls. The course is, of course, mostly flat, but it has got some doozy hazards: sand traps that aren't much softer than the fairways themselves, water hazards that are gaping canyons because it is the end of the dry season, and a couple of holes with the sea along one side just waiting to eat up a slice. 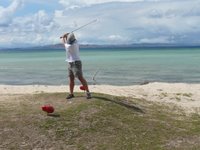 They charge $1F per lost ball, and we consider the outing a huge success because we came back with all our balls. This should not give you the mistaken impression that we played well. I would say we all played almost equally badly, landing balls in bushes, ricocheting off stands of bamboo, invariably putting our shots on neighboring holes…sometimes on both sides! Fortunately, there seemed to be only one other couple on the course…and they stayed well clear.

It is very hard for me to believe that all this has taken place in only two weeks. And in that time it has not actually been all play and no work. Don has worked on two watermakers (and discussed two others), plus I have booked tickets for cruisers on Tiffany's travel website via my cellular broadband card (www.thetwomomstravel.com) and done an interview and written another article!

Aren't we just the busy beavers! All this and barbecues most nights at Ratu Nemani Island, including last night's potluck for Robin's birthday. I'm sure you can guess how orchestrated THAT was!

Can we take any more? Well we'd better, because this Thursday starts the annual, week-long Musket Cove Regatta! We are signed up for pretty much all the events, which include two or three full-day "races" with the big boat (motors for the less than serious racers allowed) to other resorts for lunch, at least one of which is in pirate regalia, Hobie Cat races (if we ever find time to practice!), a best-ball scramble golf tournament (Oh, God!), kayak races, wet T-shirt contests, Hairy chest contests, pig roasts….well, I think you get the idea.

Stay tuned to see if we survive.

geodesic2 said...
All I can say is WOW - I am tired just reading about it and I am not even there - miss all the excitement - oh well - making headway here tho slowly. R U going to race Hobies? If so Good luck! Wish I had stayed but would have fretted the whole time - Boat Love don't you know! Say Hi to all.
Bill C
Stuck at the dock aboard
s/vGeodesic2
September 12, 2007 at 9:09 AM

geodesic2 said...
Bula - WOW love the pix - you really have captured the spirit of the place - is that your stunt double on that wind surfing board - :) - Glad to see Don has his head down - on the ball but tell him to turn his hips a bit more and bend his left knee a little bit more too - ha
BillC
September 13, 2007 at 6:37 AM
Post a Comment
<< Home
For older posts, see the Posts by Date
or Posts by Topic links in the upper left!
For our Australia posts starting in late 2008 see
Australia Blog