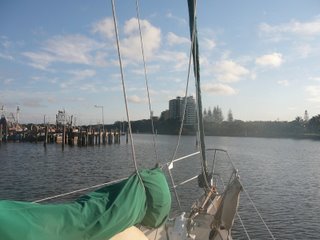 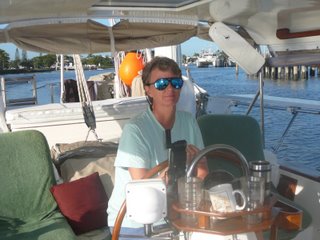 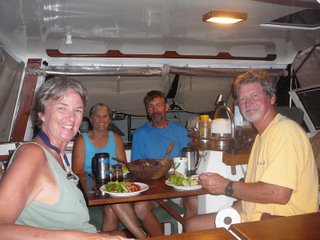 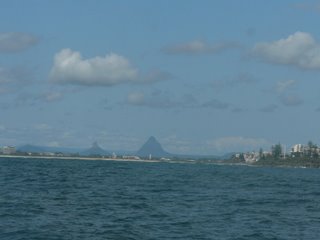 Nearly a month has gone by without an update here from the Two Captains. You probably figure that life in Mooloolaba as we’ve depicted it was so good that we’ve just settled down into an uneventful retirement routine. To some extent that is/was true. Our long 10K walks along the beach were the highlight of the day, the rest spent primping the boat so that she would be beautiful should someone come by to look at her. We made some local friends who entertained us at their homes or on their boats, we faithfully caught the Wednesday night cruiser dinner and the Sunday morning market in Maroochydore, and we were connected to the world via broadband Internet on the dock. Given the economy, it made for a quietly attractive lifestyle. It could have gone on indefinitely.

However, a couple of things happened that interrupted the flow. First, our visas came due, and although we applied for extensions on schedule, weeks went by without hearing from immigration. We were uncomfortable with taking off camping to parts unknown until the visa issue was resolved, and so we lingered. Next, the weather took a less friendly turn with hot days and regular rain showers, making our tenting plan less inviting. Finally, our three month deal with the Wharf Marina came to an end. Because the plan was/is to get out camping, it dawned on us that it really didn’t make sense to sign up for another three months at the most expensive marina around. And the month by month price was even worse. Don’t get me wrong. We don’t regret a penny we spent at the Wharf, what with its great situation and nice services.

But Mooloolaba is an hour and a half north of both our broker in Deception Bay and the Brisbane airport into which fly most Australian boat buyers. If we weren’t going to be on the boat, it made sense to move her closer to the action, especially as we could save a couple hundred bucks a month.


And so it turned out that our run down from Wide Bay Bar to Mooloolaba was not our last cruise in Tackless II after all! On Monday February 16th, we motored out the channel and turned right to putter down the coast to Scarborough. It was a lovely day with gentle seas but not enough wind to sail, although we put the sail up in hopeful anticipation. The Queensland coast of beautiful beach after beautiful beach unrolled as we aimed for Caloundra Head in order to slip into Moreton Bay the back way as it were.

Moreton Bay, like Hervey Bay was off of Bundaberg, is a wedge of water trapped between an offshore island and the mainland. In Moreton Bay, however, great long bars of sand have built up across the mouth making the ships heading for the port at Brisbane stick to confined channels. We had several big ships catch us up and pass us by, so we were happy to hug the coast. Caloundra was a neat looking town crammed in the lee of the head with the unexpected crags of the Glasshouse Mountains rising in the distance. From Caloundra we followed the deserted sandy shore of Bribie Island, another National Park, rounded the corner at Skirmish Point, and squeezed into Deception Bay, where moments after we gave up and dropped the mainsail, a sailing breeze came up.

Our first impressions of Scarborough Marina back in November when our friends Whisper and Procyon were here did not compare well with Mooloolaba. However, giving it a second chance has come good. Our slip near the end of the main dock is much quieter than the one at the Wharf, (except when the fisherman are launching or retrieving their runabouts at the launch ramp right behind us.) It is less lit at night, which makes for better sleeping, and there is a nice roster of cruising friends and acquaintances around. Scarborough biggest negative is that it is a bit remote, but, since we now own a car, that has proved less of an issue.

Getting the car down from Mooloolaba was a bit of a chore, requiring several train and bus connections and a few hours travel. But since then we have made four or five runs back and forth to change storage lockers for one closer, and to follow up on various appointments we’d made up there.

Our morning walk, which we had thought would be the biggest sacrifice of the move, has actually been a non issue. The Queenslanders sure like their waterfront parks and Scarborough is no exception. Pleasant measured walkways lead from the marina, past playgrounds and a work-out station just like the one in Mooloolaba, through local neighborhoods to just about as far as you could want to go, and because Scarborough is a quieter residential area to Mooloolaba’s resort pulse, those sidewalks are relatively deserted. No more dodging on-comers! We even found a little neighborhood café run by a spry old Greek gentleman Dimitri, with whom we can pursue our coffee research.

Even our social life got off to a great start by getting in on a jazz concert in nearby Redcliffe where fellow cruiser John of Gingi sat in with his horn with a combo at a local RSL club (Retired Service League) which led to drinks with a local group of sailors at the Moreton Bay Boat Club. The Aussies dearly love their social clubs, whether it’s a surf club, a bowls club, a boat club, a sports club or whatever, all of which seem to have cheap booze, affordable meals and pokie machines (gambling is big here).

So I guess a little to our surprise we have really enjoyed being here! However, the one thing that has been a disappointment is that there has been almost no activity on the boat. Our broker has dropped by a number of times and she insists that our boat is generating more interest than any other listing. We see lots of boat shoppers roving the docks looking at boats for sale with the Marina’s in-house broker. And boats have been selling! It’s a puzzlement.

Because we are ready to sell! Don, of course, has been ready for months, but I have been dragging my feet, hoping, I guess, that Don would have a change of heart or that there would be some kind of new revelation. And perhaps there has been, in the guise of our plans for our future. In this economy, the spring feeding our cruising kitty has contracted and these two old captains can’t come home and just rove the country in our RV like we planned. We need to create positive cash flow, so Don has been researching opportunities since we’ve been here. And we have pretty much decided to go with the mobile espresso cafe business. Guess it’s all that coffee we drank in Mooloolaba’s cafes. We have actually started the process back in the States! It’ll be a new adventure.

We’ll tell you more about all that later, but having made the decision, we’ve made reservations. Yes, the Two Captains are returning to the US…..on one-way tickets. We will depart Brisbane on April 15, leaving Tackless II in the hands of the brokers. It will probably work out much better than way, without me and my emotional second thoughts clouding the cosmic synergy.

So, now, having left it to the eleventh hour, we are indeed going to take off for a quick look-see around the countryside. It won’t be the full-fledged campervan tour we had imagined, but a briefer sampling that will fuel our fantasies until we can come back here and do it right. We are taking off tomorrow with our friends Mike and Kathleen of Content, to follow their experienced lead and to pitch our squeaky new tent in the lee their campervan. We’ll try to update from the road.

Written at 11:10 AM by Gwen and Don.
0 comments
For older posts, see the Posts by Date
or Posts by Topic links in the upper left!
For our Australia posts starting in late 2008 see
Australia Blog