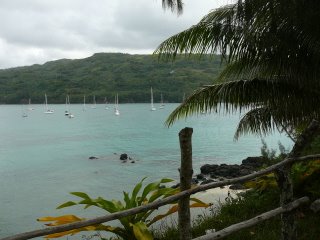 I cannot tell a lie. The officials were late. But considering is was they that had to come the hour and a half across the island in the back of a pickup truck and not us, we could hardly complain. It gave us the time ashore to explore the little village at Port Resolution.

Unlike most villages we have seen from the Marquesas to Fiji, in this one the houses are all traditionally constructed of woven sticks and thatch roofs. I can't tell you how right this feels, compared to raw rectangles of wood, tin or concrete. The houses appeared to be clustered in family groups, and everything was neat and tidy, albeit with pigs running hither and thither. The only western style construction appeared to be around the primary school, but we didn't get a chance to look in.

We did spend quite a bit of time in their 'cultural center", a separate bure with "exhibits" and laminated placards pertaining to specific traditions, customs and ceremonies. There even was a reproduction of an oil painting of "the only first hand witness of a cannibal ceremony". I suspect a Peace Corps contribution to the effort. We were told there is an American lady living in the village, but we did not cross paths.

When they did arrive, the officials were fairly organized. There was even a representative from the bank to change our "hard currencies" (US and Aussie $) into vatu. Vatu are one of those currencies where $1000 vatu equals a dollar. Hard to get your head around.

We had a relaxed afternoon in preparation for muster at 4pm to climb into three pickup trucks for the trip to Mt. Yasur. Although there were only six ICA Rally boats (note the one with steering problems achieved a fix and caught up with us all), there were another eight or so boats in the anchorage who joined the tour, so the trucks were pretty well packed with about ten people sitting on benches around each of the truck beds. The "roads" are mountain tracks with some very large holes. 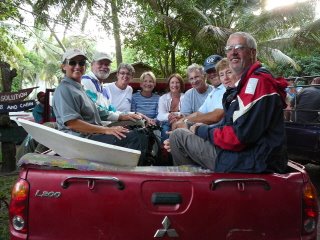 These trucks are the only transportation these villages have!

What can I say about Mt. Yasur. It was pretty incredible. It rises from the mountainside in a neat ash cone from a burned area of lava rock. 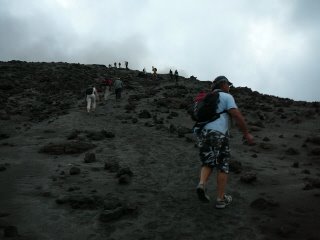 The trucks drive as close as 150 meters, and the brave-of-heart climb the rest of the way up a soft black-sand path to the rim. Let me hasten to say this is the upper rim. They used to let people descend to the lower inner rim until a Japanese lady was incinerated in an instant by a molten blast! 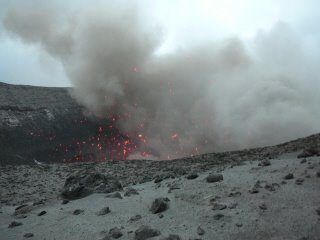 Believe us, the upper rim was spectacular enough. With the wind from the southeast, most of the smoke was blown away from us and the experience was curiously devoid of sulphur smell. There were evidently two main vents. The left hand one put on most of the fireworks, blasting red hot molten boulders from its glowing core 200+ feet skyward at regular explosive intervals. The vent to the right, however, specialized in freight train sound effects and towering columns of roiling black smoke. 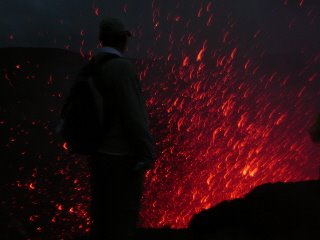 We stayed until after dark and captured a great deal of the show on camera and video. It is powerful and mesmerizing, and that's at activity level two. (No one's allowed up if the level rises to four or higher.) One can readily understand how the mountain figures as a powerful deity in the "kastom" beliefs.

Speaking of "kastom", (Vanuatu has hundred of languages that developed in the isolated villages. Bislama, a sort of pigeon English, in the national shared vernacular. Many islanders do, however, speaker either English or French as well.) …the very next morning we were ashore at 7:30 am to climb back into our trucks for a ride to a 'nearby" village to attend a "circumcision festival." Stanley, our yachtie liaison at Port Resolution, was very excited for us, because this was not a tourist show, but a real event – indeed one of the traditional events we'd read about in the cultural center.

The nearby village, said to be in walking distance, was a 45 minute ride by truck. Presumably, there is a shorter footpath, because Stanleys wife Mariam did appear under her own footpower! The yachties and a few tourists from a hotel were seated on a rise looking over the ceremonial ground, packed dirt, where there were five piles of what most of us took to be umus or earthen ovens. 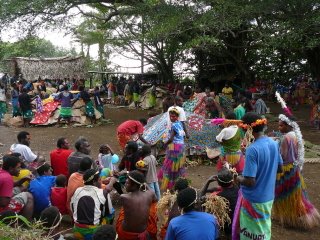 We were right as it turned out later, but the first stage of the ceremony was for the five families of the boys to start laying on piles of gifts: first perhaps a dozen woven pandanus mats, then dozens of sulu-length strips of colorful fabric (spread one at a time!), then blankets, then more mats and a bundle of pandanus baskets, all this for EACH pile. Each clan group congregated in a separate corner of the ceremony area. 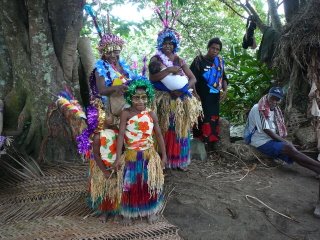 The men wore sulus, often matching within the clan, motley T-shirts, occasional crocs (Chinese rip-offs) and the odd feather in their hair. The women were far more decorated. They wore layers of grass skirts, a sarong around their tops, garlands of plastic flowers and Christmas tinsel around their necks and multiple feathers and other decorations in their hair. Obviously, even "kastom" attire has been influenced by the modern world.

After all the last baskets were balanced on the piles, in came the livestock. This was pretty hard for most of the Westerners to take. Each family provided pigs, goats or cows. The pigs were brought in squealing, hung by their feet from poles, and then stunned by a blow with a club. (This brought vividly to our minds the reproduction we'd seen in the cultural center!) The cows and goats were, mercifully, slaughtered dispatched out of our view, and then dragged on to the 'stage" by teams of men. The young Welsh girl next to me wept silently through the whole process.

Only now was the stage set for the boys to come out of the bush. Traditionally, the circumcisions were done by bamboo scalpel without anesthetics. Nowadays, we were told, they do it in the hospital "so the boys don't have to have the pain." No mention was made of the more hygienic conditions! Then the boys are sent away from their mothers "out into the bush" where they are in the care of men who supervise the healing and provide manly instructions. The ceremony we were attending was for their return from the bush.

The boys when they finally appeared were dressed up fancy like their mothers. They were paraded through the piles with their male relatives shrouding and protecting them. The boys looked very young and small and overwhelmed by all the hoopla. There followed much kastom dance, chanting harmony by the men to a rhythm stamped by their bare feet in the dirt. (Crocs were kicked aside for this!) The women circled the men bouncing like kangaroos and contributing their high harmonies. Clearly their legs are in better shape than ours!

When the dancing was over, the boys had disappeared again, and now began the dismantling of the piles they had worked so hard to build, each pile given to the mother's family who had come from distant villages. (When women are married off, they move to their husband's village. For this ceremony, the wives families traveled to be on hand.) At the bottom, under the piles of leaves did, in the end, appear umu earth ovens from which were extracted packets of cooked pork and laplap, a traditional dish easiest described at a flat, starchy pudding baked in leaves. One of these packets was delivered to the cruisers, who despite their aversion to the slaughter techniques, weren't too hesitant about chowing down! (Even the Welsh girl had some pork!)

At this point the ceremony broke so that all the food stuff could be prepped and put to cook for the big feast and dance that night…actually the main event. As the cruisers dispersed to the trucks, we were told we'd be welcome back that night, that the doings would mostly likely last from sunset to sunup. I think a German and Dutch family did go back, but most of us returned to our boats, anxious about a forecast wind shift and plans to move on in the morning.