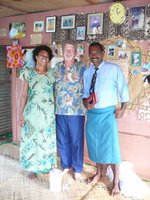 Our second day in Navigiri was a Sunday, and because church is the keystone of life in Fijian communities, Don and I accepted Sara and Freddy's invitation to spend the day with them. We got ourselves as properly dressed as we could manage (Don in long pants and collared shirt and me in a dress!), and dinghied ashore at about 9:30am, beaching the dinghy in the mud to the amusement of a gang of kids all properly dressed in sulus and crisp white shirts. 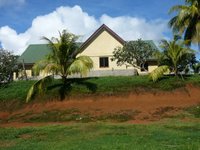 The dominant building in Navigiri is the big yellow Methodist church. Its members come not just from Navigiri but from several other nearby villages, by foot or by boat, just as residents of this village who attend a different denomination church travel to it. Everybody was dressed to the nines. The women and girls mostly wore the traditional Fijian outfit of a cap-sleeved dress over a color-coordinated sulu beneath. The men and boys wore western-style dress shirts and ties over their formal sulus, and almost every elder man wore a sport coat! This in heat that had me utterly wilting because I had to wear a linen top over my calf-length dress because it was sleeveless! (In Fiji a woman's shoulders should be covered.)

Sara led us to the pews on the right, where we were joined by most of the old ladies of the congregation. Across from us on the left, sat all but the littlest kids. In the main nave of the church, the choir sat on the right, the women in front, the men behind them. The balance of the congregation also split themselves by sex, with the women filling the left hand pews, and the men behind the choir on the right. The only exception to this was the chief and his wife, who sat together in the front pew on the left. 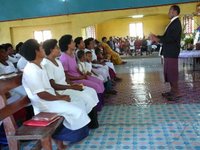 The service was two long hours, of which we understood not a word….except "Jisu" and "Amen." There was not even a single sentence in English to give us the gist of things, as we'd gotten at the Catholic church in Tonga. Still there were several aspects of the service that made it well worth our while. First, the singing of Pacific peoples is invariably impressive, with powerful voices and beautiful harmonies (although the tunes here seemed more westernized than they had in Tonga or Easter Island). Sara thrust a hymnal in my hands, and to please her I made an effort to sing along, despite not understanding the words. According to Don, this caught the attentions of a lot of the choir and apparently bought me a lot of brownie points, which came back to me all afternoon… "You sing in Fijian!)

The other aspect that delighted us was the people watching. It seems there is a universal human-ness about people in church, the little kids in their Sunday outfits being distracted by their mothers, the older kids fidgeting and punching each other in the far pews as the service wore on, but best of all the sisterhood of the ladies as they goosed and batted one another with their fans. (And have I said a special prayer for the old woman who pressed up me her feather edged fan for the duration?)

Sara kept whispering to me, as the service inched along to its end, that soon we would leave and go home and lie down, and sure enough, after we waded through all the post-service handshaking, we went back to Sara and Freddy's and, provided with pillows stretched out on the floor with Freddy and the kids.

Meanwhile Sara laid the tablecloth in the center of the floor, …with silverware AND cloth napkins provided for the ka'palangi (foreigners)… and set up upon it the big Sunday meal that she had cooked earlier. 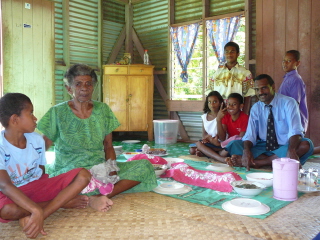 The meal was superb: tender chunks of octopus in coconut milk, palusami (taro leaf in coconut milk), and huge chunks of boiled cassava and yam, along with my loaf of banana bread which was a huge hit. Like Tongans and Samoans, Fijians eat mostly with their fingers with a fingerbowl of water at each end of the table for cleaning up. To our relief, unlike in Tonga, we all – men, women, kids and guests – ate together at the same time. 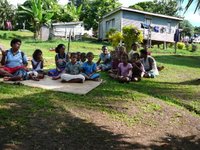 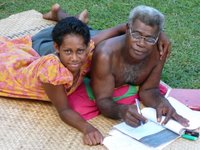 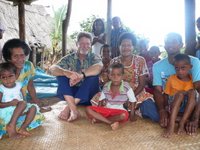 In all the houses around us, all the other families were doing the same, and afterward, everyone retired to cool shady spots outside to rest and visit. 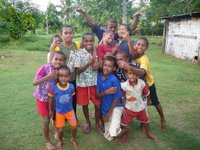 During none of these events (church included) was the digital camera allowed to sit idle. Like a movie director, Sara told me what pictures to take of whom, and amazingly everybody seemed thrilled to pose, pose again, and yet again. 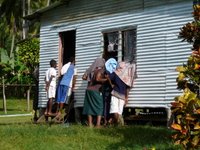 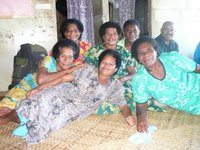 I was sent running up hill and down to catch this group or that, these adorable children or that grandmother, the old folks sitting around the kava bowl, or the men watching the rugby finals on TV through the chief's window. Everybody was happy to pose, singly and in groups, and this with absolutely no indication they thought they would ever see the prints. Just a glance at the little screen on the back was enough. I wish we'd had a second camera to take pictures of the picture-taking 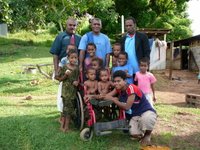 Finally as the tide began to come back in, we took our leave, and once back on the boat peeled off our dress clothes sodden with sweat and dove into the water to cool down..........Aaaahhhhhh ...... It's a good thing we anchored on the far side of the bay.

geodesic2 said...
Vivid descriptions - I had many visuals - nice

Bill
s/vGeodesic2
June 5, 2007 at 11:10 PM
Post a Comment
<< Home
For older posts, see the Posts by Date
or Posts by Topic links in the upper left!
For our Australia posts starting in late 2008 see
Australia Blog