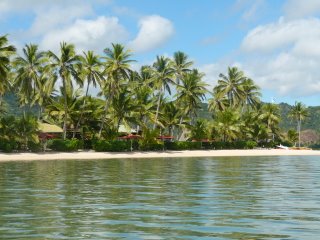 "Nukubati is a small luxury private island, secluded with an untouched natural splendor, a remote haven surrounded by white sand, lush rainforest and crystalline coral reefs." So goes the text in the eight-page color brochure for Nukubati Island Resort, the laid-back luxury resort tucked into a perfect alcove of a bay about five miles beyond our last anchorage. We didn't know much about it as we approached, except that it was an exclusive sort of place, and as we dropped our hook in the bay we weren't sure what kind of reception we would receive.

It is a striking setting. The resort occupies one of the two Nukubati (pronounced Nook-oom-Ba-Tee) islets that are joined together like Siamese twins by a mangrove bank. On the mainland behind the resort rise the crests of a multi-peaked mountain ridge, densely clothed in rainforest and old coconut plantations, while in front is an apron of white sand (from which the island gets its name, as "nuku" means sand), a rarity in these parts. An assortment of dive boats and runabouts are moored in the shallows, handsome squares of red umbrella shade private beach chairs, and roofs of thatch peek out from under coconut palms. 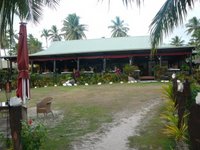 Nobody came out to run us off, so we tentatively made our way ashore around happy hour, to introduce ourselves and see if we'd be allowed to buy a drink. The main pavilion, of similar concept to Joe and Julie's new place up the coast, is a large open-fronted building with high ceilings, thatched roof, and the same style of plaited wall covering, in this case bamboo. 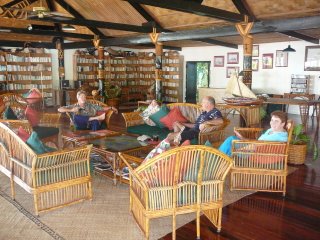 But while Joe and Julie's place is raw and new, the décor of this space had the mellowed maturity of years of careful nurturing. In the back of the room to the right is a bamboo bar while to the left is a cozy reading nook and 3,000 book library. Comfortable chairs and sofas cluster in conversational groupings in the middle, and across the front are seven red-clothed dining tables. Plants and flowers augment the view, and I immediately recognized the maqimaqi (mangheemanghee), a traditional Fijian rope art that Julie had described to me, adorning the junction of every post and joist.

Two lovely young ladies in flowered dresses met us, tittered when we asked the price of a cocktail, and went to find the owner – Jenny Leewai Bourke.

Jenny is a handsome woman of Fijian and Chinese extraction who, with an elegant graciousness, made us welcome to have a drink or dinner should we choose. Let me say up front, that thanks to our background in the charter business, we were sensitive to the private nature of the resort and understood that anything we might do here would be a privilege not a right. Our discretion in this more than anything paved the way for a very enjoyable stay that ended up lasting a week.

A small plate of canapés came with the drinks, followed shortly by dishes of peanuts, roasted coconut, and an Indian version of wasabi peas. Jenny sat with us and told of the history of the resort, an effort she and her Australian husband Peter started sixteen years ago, and sighed over the impact of the December coup on the country's tourism industry. Indeed, that first evening, at a time of year when she might expect to be full, there was only one honeymoon couple at the resort, who kept to themselves, playing Scrabble by the beach until they couldn't see any more! Seduced by the ambience, we made reservations for dinner the next night. 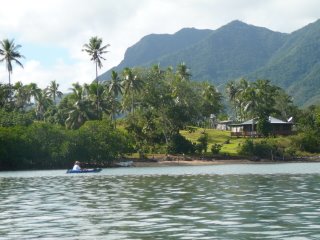 Saturday dawned crisp and clear. Feeling motivated, we pumped up our two inflatable kayaks and set out for a paddle, which eventually carried us all the way around the Siamese-twin islands. The second island is not part of the resort and has several nice homes. Kids called, "Bula!" as Don paddled near, while I hung back to enjoy the aesthetic of the mountain peak thrusting up from behind. Thick mangroves clothed the south, east and north faces of the pair, and they are girdled by a shoal of sand, weed and coral all the way around. Had we made our paddle circumnavigation at low tide, we would have had to cover twice the distance at least, but as it was it felt like a pretty good workout. We topped it off with a refreshing swim off the back of the boat.

In the afternoon, we watched new arrivals zoom past Tackless from the resort's dock on the mainland. For new arrivals, the staff assembles on the beach and meets them with music and flowers leis, and when we came ashore for dinner, we found there were now six guests, two American couples and one from Australia. Sunset is a big deal at Nukubati, and rightly so. The view west to the horizon is uninterrupted making it perfect for green flashes. Jenny celebrates sunset every evening with complimentary champagne. Since we didn't know, this left us with cocktails in one-hand and champagne in the other! Probably not the best mix.

Nukubati makes a big deal about the guests' right to privacy and rightly so. The honeymooners we'd seen the first night certainly liked to exercise that right. However, since we two captains have all the privacy we need onboard, when we come ashore we hope for a little socialization. Fortunately, this evening four of the guests joined us and Jenny around the hors d'oeuvres. We introduced ourselves as the couple with the bure in the bay!

Dinner was served at individual tables as the mood took. Every evening Nukubati's kitchen offers two choices and Don and I split the menu down the middle. For appetizer, he had their version of poisson cru (raw fish salad in coconut cream) while I had a plate of eggplant caponata; for the entree, Don selected the lobster mornay while I had filet of local beef in rocket sauce (rocket is the name of arugula in this part of the word!) Dessert was Nukubati Pie, a coconut custard cream, with a scoop of ice cream. Afterwards, as the other guests had escaped to their bures, Jenny invited us to linger for a glass of port.

Ah, the good life. It seemed a long, long way from village life in Navigiri, and yet, in its own way, equally Fijian. Maybe even more so, preserving and celebrating as it does the finer traditions of architecture, style, and art, of which there is little sign left in the villages.

By the time we left, the tide was low and the sky lit only by stars. Our nightly view of the resort – the shrouding palm trees just slightly spot-lit against the night sky, (as we paddled our way out to water deep enough for the outboard)– is one Nukubati's guests never see. Views from the water are always the sweetest.

geodesic2 said...
awesome adventure!!! Did you see the green flash? I thought I saw one once right off of 3 Rooker - but maybe it was the taquilla. Have you ever seen the green flash???

Bill C
s/vGeodesic2
June 14, 2007 at 9:49 PM
Post a Comment
<< Home
For older posts, see the Posts by Date
or Posts by Topic links in the upper left!
For our Australia posts starting in late 2008 see
Australia Blog