Friends Sites
sv Soggy Paws' Blog
sv Ursa Minor's Blog
Saturday, May 3, 2008
About Boatyards and Boer Goats!
How fast a week has gone by! We have fallen into quite a routine, staying awake a little later each night and rising a bit later each morning. We try to fit a short walk in each morning before our complimentary breakfast at the resort, at which we tend to eat way more than we should because it is free. Lunch is invariably at the Marina Cafe because it is cheap and tasty AND they have free WiFi as well as washing machines around the corner. Sadly, dinner is an unreliable meal. Our only choices are either the resort -- which has a two-for-one pizza night on Mondays and Fridays (popular with the boaties) and a reasonably affordable bar menu other nights -- or the Vuda Yacht Club which definitely has the atmosphere, but rather disappointing cuisine. The options are already seeming old. I am not cooking on board because we decided to go ahead with the paint job for Tackless II, so it makes no sense to clean everything up and stock the fridge and shelves only to have to shut down as they sand the fiberglass etc. 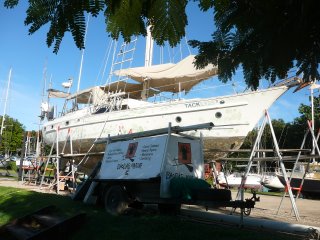 Don has spearheaded great progress on the boat. The day after the last update, he and David managed to get all the through-hulls out, a project that had had Don stressing for weeks. As often is the case, what he stresses over most goes unexpectedly smoothly. It was still a lot of work, and Don was hugely grateful for David's help.

Unfortunately, David is back at work on Jim's boat Flight for the next week or so, so Don has had to make do with me. Together we have gotten the boat emptied out into a trailer our contractor Baobab Marine has lent us, plus we have stripped a lot of hardware off the deck, including the main and staysail boom,the compressor and deck storage box (which has never been off before) and the dinghy. The deck was a mess with the debris of six months of leaves and a blue tarp that had distintegrated into blue threads. Cleaned up she actually looked pretty good; maybe we don't need to paint, said Don! Not quite. Besides the sanders are already hard at work.

We've managed several improvements in the working conditions. We got our big awning from Trinidad out and hoisted over the foredeck as well as the one we had built in Mexico to hang over the aft deck. Also, we did a deal with a departing cruiser for their air conditioner, of which we finally took possession yesterday. After working hard for 24 hours it has cooled the boat down at least fifteen degrees and sucked out a ton of humidity which drains away through a hose shoved down the scupper at a rate approaching a small faucet. With luck T2's doors will close again someday!

Socially, it's also been a lively time. Jim of Flight has had two crew fly in and occupy the last two discounted rooms at the resort. Ruth is an attractive and interesting young woman who grew up in England but who has been living in New Zealand the past four years. She is taking this adventure, her first open water sailing experience, as a break from her career as a geneticist! Bob is a retired fellow from Rochester, NY, who instead of buying his own cruising boat has made a hobby of crewing on other people's boats. This will be his fourth crew passage...the last one being a trip from the Horn to Buenos Aires! The five of us generally dine together and then divide up for the day, although Ruth and I have made several trips to town together.

The biggest distraction of the week began when Don looked up from lunch one day and noticed Joe and Julie (of Palmlea Farm in Vanua Levu where we spent so much time last season) standing at the fuel dock gazing across the basin of the marina. They were, they said, wondering if we might be here. Since Tackless II is poised broadside at the opposite rim (sitting on jackstands, she towers over the other yachts moored or still in pits),, it's hard to imagine how there could be any doubt. Joe and Julie and their farm manager Ravine were in town to meet an Air New Zealand flight coming in from Australia the next evening bringing them 60+ Boer Goats, their latest enterprise for Palmlea. (http://www.fijidailypost.com/news.php?section=2&fijidailynews=15706 as well as other links found under Palmlea Farms!) 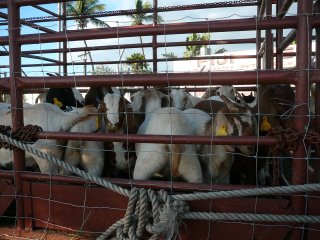 Boer goats are larger and meatier than their run-of-the-mill cousins, and this project is a big deal, not just for Joe and Julie (who, in their seventies, might supposed to be retiring!!!), but for Fiji agriculture in general. Joe had a big press kit prepared and the relevant ministers of the Fiji government were all over it. Unfortunately, it was impractical for us all to troop down to the airport to see the goats' actual arrival, but we did all cab to the Lautoka Wharf Thursday to see them transhipped by truck to the Westerland ferry for an overnight ride to Savusavu and thence over the mountains to their new home at Palmlea. They looked hot, tired, uncertain and...well...like goats. Joe and Julie and the Fijian government have an ambitious breeding plan planned. Ravine is proud as punch.

Also in the small world department, our friend Peter of Otama Song sailed in from Tonga for some yard work before sailing home to Australia. In the process of hailing him, I borrowed a radio from a boat in the marina, and then got talking to the owner, who had worked in the liveaboard dive business for a number of years as I did. In his case, he had worked for the Aggressor dive fleet. As we worked through the roster of people we knew in common (most of them former Tropic Bird crew) it turned out that he'd been crew on Lammer Law at the same time as I was on the Aquanaut ships, at which point we realized we'd met! Interestingly, he was closing his sailboat up to return to work as a cruise ship captain with Royal Caribbean! That's the biggest jump I have ever heard of for former dive yachties!

And so it goes here in Paradise. The weather has been consistently hot and sunny, except for a bit off rain and wind night before last which brought us a bit cooler weather this weekend. thenext few weeks will probably be more of same...but never fear! I will keep you updated!

Written at 10:34 PM by Gwen and Don.
0 comments
0 Comments:
Post a Comment
<< Home
For older posts, see the Posts by Date
or Posts by Topic links in the upper left!
For our Australia posts starting in late 2008 see
Australia Blog