Friends Sites
sv Soggy Paws' Blog
sv Ursa Minor's Blog
Wednesday, August 13, 2008
10 August 2008 -- Erromango
We set sail northward from Tanna in the company of David and Chrissie of the Kiwi yacht Runaway Bay. We first met them when the pulled into the slip next to us in Vuda shortly after our launch, and in the afternoon after the Tanna festival had found ourselves compatible enough to proceed from tea and banana bread to checking out our new case of Tusker Beer, thence to comparing rums and then right on into a spontaneous stir fry dinner.

It was a bit sloppy just outside Port Resolution where the next morning we bashed our way far enough offshore to avoid any fallout from Mt. Yasur. 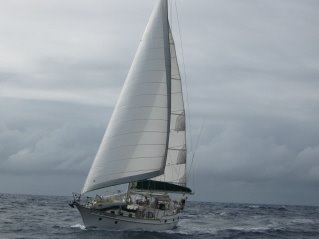 But almost from the moment we turned north, the mist lifted, the clouds cleared and the wind settled once again conveniently on the beam allowing us to keep pace with the speedy Kiwis and generally have a fine 68-mile day sail to Dillon' Bay, Erromango.

As we approached Erromango, we heard this really unfamiliar sound…the sound of the fishing reel whizzing out at a rapid pace! By the time Don could get to the rod, the mahi mahi had jumped four or five times, but I guess at the blistering pace of seven knots, he was unable to shake the hook. 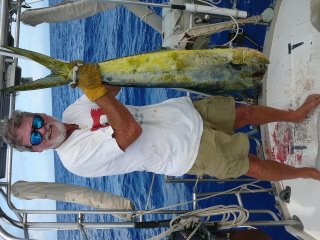 I worked at slowing the boat down by furling the genoa while Don held on to the rod for dear life. (You may remember our last big mahi got away!) This one did not, and after we managed to wrestle it aboard (bloodying the bejeezus out of the back deck in the process), it proved to be a record setter for Tackless II – five feet! (Ooops sorry for the sidewise pix, will fix another time!!) The new paint job has been christened.

Dillon's Bay is a wide V centered on the mouth of a river disgorging from a cleft in Erromango's step mountain range. The village of Unpongkor is strung out along the north bank of the river. Interestingly, the river is called the Williams River after the first missionary that was killed there in 1839. The body was bartered with an inland tribe for food, protein in exchange for some veggies perhaps?

The boys went in within hours of our arrival to take in the barracuda that David caught, and the remains of the mahi after Don had filleted it. Islanders are always aghast at what cruisers consider waste – the huge head in this case. The carcass was spirited away in no time. Very quickly they were solicited to examine a young man with an eye infection after getting a stick in it, followed by an ailing generator. The two mechanically-minded guys were a lot more optimistic about helping the latter than the former, but by chance the rally leader, David of Diomedea, is an eye surgeon and Runaway Bay David was able to contact him on the radio for some guidance. Both projects ran over into the morning, and I'm pleased to say both patients were left in better shape for their efforts. While the guys were ashore I took advantage of the sunshine and stayed aboard to do several loads of laundry. While I was at it I had two young visitors come to call. 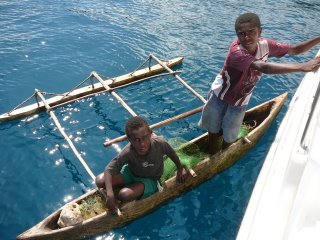 These boys, aged eight and ten, made this canoe themselves!

In the afternoon, Chief William undertook to guide us to some burial caves. It took about a half hour by slow dinghies (we'd been joined in the anchorage by then by Reg and Lois of Force Six from Tasmania and a group of four French vacationers on a borrowed boat from New Caledonia), and we all got thoroughly soaked. Chief William, a man of some age, nimbly led us up a path (that was poorly suited to the Crocs I had worn…I thought we were going to caves on the water!). There were two caves: one a five-foot wide mouth descending into the dark, the other an open alcove reached by scaling the roots of a Banyan tree woven into the side of the cliff. 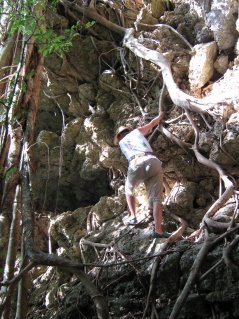 Chief William did a little "tok tok" in the native language to advise the spirits we were just here for a respectful visit, before removing the "barricade" (a grid of sticks) placed there to keep the spirits in. Chief William does this because his father told him to, even though he himself doesn't "believe in all that."

In the end, all of us but the French went to both caves, and sure enough, in each, were neat piles of human bones. 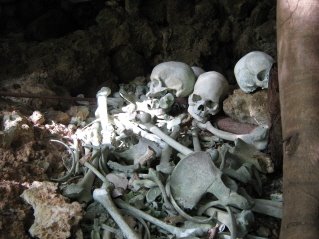 Chief William said that the ones in the upper cave were his grandfather, and that the bodies were brought there during a battle when they didn't have time for the one week mourning. David and Chrissie were incredulous that this was all allowed so casually. They said the Maori of New Zealand would never permit outsiders anywhere near!

After the dingy ride back to the village, we ladies ventured inland along the river road to find the swimming hole in the river for a fresh water wash. Everyone greeted us as we walked through the tidy village, children giggling from the branches of huge spreading banyan trees. Unfortunately, as we neared the spot, we were advised that run-off from the previous night's rain the in the mountains had muddied the water, and indeed it did not look inviting, although several young girls proceeded to swim. 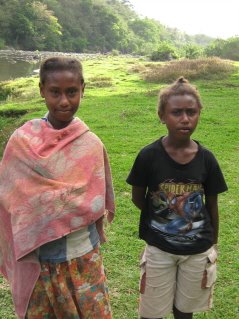 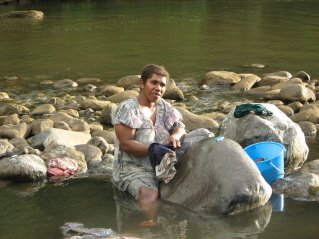 Instead we made our way out into the boulder strewn stretch where ladies were sitting to do their laundry surrounded by kids our grandson Kai's age and sat and chatted with them.

Meanwhile, while Reg and Dave worked on yet another generator, Don went off with a villager he'd met earlier (another David!) who wanted Don's wise western input on some "development plans" he had for a little back-packer resort with bures and rental kayaks and the like. You may wonder how visitors might get there without yachts, but in fact there is an airstrip on the other side of the island via which these villagers ship lobsters and fish to Port Vila. Don said it was a beautiful piece of land with great views with a fair amount of landscaping work already in process…things, Don says, you can do without a lot of money!

That evening we had another potluck supper on Tackless II. As we had already shared out half the mahi, the potluck put a major dent in our remaining supply. But the others provided four or five side dishes, including from the galley of Force Six a huge plum pudding for dessert, complete with brandy sauce . As a slight drizzle rolled down out of the mountains, we were able to drop all the windows and have a cozy social evening.

The next morning we took off on our own for a 168-mile run up to the island of Malakula to meet up with our friends Randy and Sherri of Procyon for a special festival being organized there just for cruisers.

Written at 5:55 AM by Gwen and Don.
0 comments
0 Comments:
Post a Comment
<< Home
For older posts, see the Posts by Date
or Posts by Topic links in the upper left!
For our Australia posts starting in late 2008 see
Australia Blog