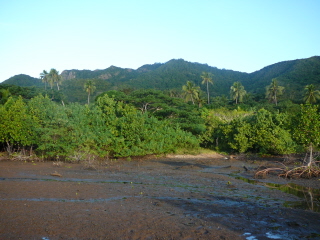 James and Pearlie's estate at Nukubati Bay stretches from the mangroves at the water's edge to the ridgecrest of the mountains in a broad swath between two local villages…some 800+ acres! We drove the dinghy across the bay, found the post indicating their access channel, and rowed in up a thin channel cut through the mangroves. Having seen us coming, our hosts were waiting to greet us on the muddy bank created by a fresh water stream and the tide. After anchoring the dinghy where we hoped it would be floating by the time we were ready to leave, we followed them up a path into the woods.

We really had no idea what to expect. The word "plantation" to Americans conjures images of the old south, of grand houses with white columns – the Tara of "Gone with the Wind." But rural Fiji is much more rustic than the South has been in a century. These plantations and farms are still in the mold of those pioneers who forged the American West or the Australian Outback. In Vanua Levu, outside of the two main towns, there is little modern infrastructure. The roads are dirt; electricity, when it exists, comes from private or shared generators; and the phones (maybe one per village) are radio telephones.

On top of that, the main house on James plantation has been closed up for years, and what caretaker there was seems to have drifted away. In Fiji "abandonment" means fair game, so not only has the house been scavenged for furniture and utensils, but somebody made fair headway dismantling structural beams! James and Pearlie had warned us they were "camping out." 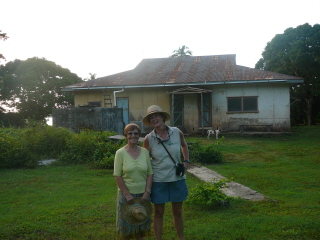 The house at the top of the hill had that square shape common to farmhouses world around, but no second story as we'd see in American, and its exterior was clad in what James called "cement tiles", big squares of gray siding made out of concrete and chicken wire. It has once boasted a bathhouse with running water which had been completely dismantled and carted away, as had the outside kitchen. But inside was a surprise. It was much bigger than it seemed, with a far more complex architecture than we'd seen in village homes. When James had grown up here it had five large bedrooms, and had been the center of a completely self-sufficient estate, where everything consumed by its residents was grown or made on site. James and Pearlie had put together a nice galley plus a bed room for themselves (on air mattresses!), and despite the ravages of the scavengers, it still had a solid homey feel to it. 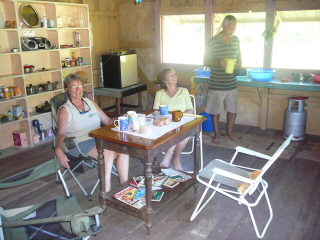 Pearlie served us a nice lunch of curry, rice and roti, over which James told us a lot about Fijian history and how it led to the situation Fiji finds itself in today, a country hugging to itself the traditions of its ethnic identity, where people like James and Jenny, of mixed ethnicities, not to mention Fiji's huge Indian population, will never be considered real Fijians. And, and you might expect, we talked a lot about coconuts, their past and their future. 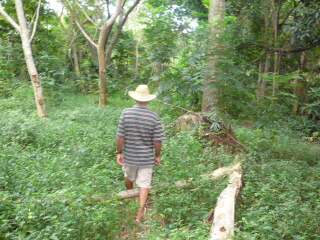 After lunch James led us all on a hike through the woods to show us the plantation's second house. When another family member had the plantation house, James and Pearlie had some years back fixed this secondary house up for themselves. Now his current caretaker and his family live there while they cope with restoring the big house. The woods we tramped through held a mix of full-grown tree species, the more amazing in that they grew in what was once the plantation's rice field. The coconut groves are similarly overgrown, and James is trying to come up with ways to sell the trees for wood while recovering and replanting the coconut groves. 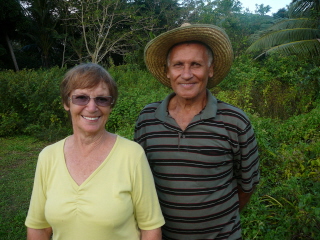 Obviously, it is very hard to capture here all the things we learned about Fiji from our afternoon with James (not to mention our stay with Jenny at Nukubati). It is a complex country, with tasks both physical, technological and social to master.

Written at 5:35 PM by Gwen and Don.
0 comments
0 Comments:
Post a Comment
<< Home
For older posts, see the Posts by Date
or Posts by Topic links in the upper left!
For our Australia posts starting in late 2008 see
Australia Blog