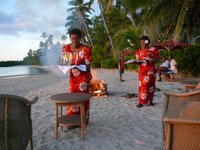 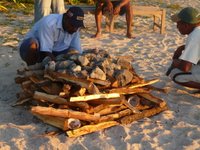 Beach Feast
On Sunday, as we were taking our leave from Nukubati resort after church, Jenny had invited us to come ashore Monday night for a "beach barbecue" she and her staff were putting together. "Very informal," she said, "we all eat together."

After a day on shore tramping through the woods, we were hot and sweaty and hurried back to the boat for a shower and change of clothes and arrived on the beach just in time for the sunset champagne (Yes, Uncle Bill, there was a great green flash!) and the gathering of beach chairs around a huge square fire Jenny's guys had built on the sand. 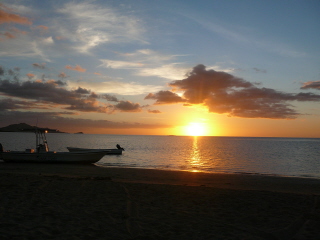 On top of the fire was a layer of black rocks, and, as the fire burned down and the rocks got hot, they threw on fish, clams, breadfruit, eggplants, cassava and who knows what else. While the tourists sipped fru-fru cocktails (by now we are pretty much one of the gang!), Jenny's girls laid out a long line of mats on the grass, and set the "table" for our meal. 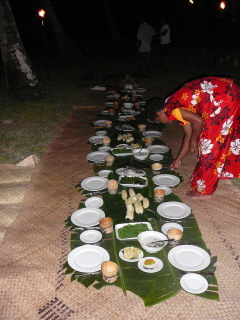 The only thing informal about the feast we enjoyed that night was that the staff ate with us. When you consider that there were only six resort guests, we two interlopers, plus Jenny and her visiting daughter, the staff, ten or twelve in number, outnumbered us!

But what a meal! In addition to all the goodies cooked on the fire, there were several dishes all cooked in coconut milk, that came out from the kitchen: fresh water mussels, ferns, pumpkin and seaweed, all dishes from Jenny and the staff's roots and all really yummy. There was also a boiled taro to go with the roasted veggies and roots and a seafood soup in coconut bowls. Unlike the umus we went to in Samoa and Tonga, silverware and napkins had been provided, and although everybody sure used the heck out of the later, most were good sports and ate Fijian style with their fingers. 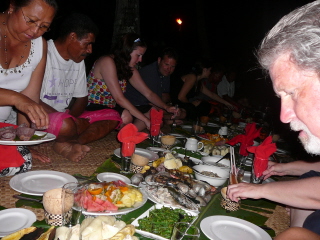 This was far and away the best "traditional" meal we have enjoyed anywhere, and it was particularly special because we came as Jenny's guests.

About ten years ago, Jenny and Peter added diving to Nukubati's offerings. It's a natural for this, because the north side of Vanua Levu is framed by the sinuous Great Sea Reef, the third largest barrier reef in the world. The Great Sea Reef, in most places, is about ten miles from the main island, except where about halfway along it loops out in a horseshoe shape around the island of Kia. Nukubati is well positioned for its boats to scoot out to Ravi Ravi Pass for dives outside the Reef as well as inside.

Since the resort's signature is privacy and personal attention, their dive operation works pretty much the same way, so we did not assume we would be able to dive with them. And in fact, Jenny had left it up to the guests to decide. I'm glad to say we were voted in…but, as it turned out we never did dive with them. I woke up the morning after the barbecue with a pounding headache, which I attributed to the mix of the sunset champagne and an alcoholic concoction called a Nukubati Sunset. It was a helluva time to remember that after my bout of the bends, I am not supposed to drink before diving. How ironic that it was one of the few drinks I have had all season!

So we cancelled, which worked out okay because Jenny had forgotten to tell the dive staff to prep for us! Clearly it wasn't meant to be. I stayed low all day, and we decided to skip happy hour ashore, because we'd been told a kava party was scheduled, the last thing my head needed.. What we didn't realize was that the kava party came complete with an evening of traditional music by the staff. We could hear just enough of it wafting over the water to make me pout at missing it. If our dinghy hadn't already been up, I'm sure we would have scooted in and lurked!

Wednesday morning we decided that it was probably time to move on. It would be easy to grow roots here, and while I believe we were welcome to stay, there were things on our To Do List that we couldn't tackle here. For one we needed to get to Labasa and get a new prop for the dinghy. For another we still had to strip the cockpit teak, sand and re-Cetol it, not an activity we thought the resort would appreciate. Plus we had called our friends Joe and Julie to tell them we were on our way. So we probably should be on our way.

We went ashore to pay our bar bill, and to take our leave, which we did over tea and pineapple muffins, plus a chance to help sample a new appetizer-- of smoked wahoo, watercress and sprouted coconut heart in chili vinaigrette – destined for the night's dinner menu.. Before taking off, Jenny gave us the 25-cent tour of the parts of the resort we hadn't seen: her extensive gardens, fruit trees, dive shop, power plant, watermaker set up, tennis court (!), and one of the honeymoon bures being readied for a new arrival. The bure was handsome, with a large sitting area, king-sized bed, two person shower, and even an enclosed sunbathing area where "Europeans can sunbathe topless." Each bure also has a thatched outside sitting area and its' own two beach chairs.

All in all, Nukubati Island Resort is an awesome operation, one that takes constant attention by a huge staff, a fact we respect even more after seeing at James and Pealie's how the environment makes it so much work. In a way, Nukubati is a modern version of what James' great-grandfather's estate was in its heyday, self-sufficient and catering to many. But, as beautiful and well-conceived as the resort is, it was the graciousness with which we were received and included that made our stay in the anchorage so special – all the sweeter because they had no obligation to extend it to us.

Back on the boat, we hoisted the outboard and made ready to leave. Only then did we notice the increasing overcast and an odd wind springing up from an unusual direction. On this side of the island, our reception of the radio weather forecast is unreliable, and we hadn't stressed when we couldn't copy it that morning. Every day we'd been here had been sunny and cleaand. What was afoot? We decided to sit tight through lunch, and then, when there was still no improvement, hang in one more night. If there was something brewing, there is little better place on this whole coast to be than this bay, where we could, if necessary pick up the anchor and tuck way back in under James & Pearlie's place.

The next morning we were socked in! Not just overcast, but low clouds rolling down the mountains and wiping out the visibility with misty showers. Yet the morning radio forecast insisted on the usual "Fine" weather for the area?! So…we waited, and sure enough, after breakfast, the rain rolled back, the clouds parted, and the dive boats from Nukubati left. Business as usual. Fortified by the forecast, we picked up our anchor and motored out.

We weren't more than a few miles along, when the clouds and showers rolled back in, and the wind came around on our nose! Wouldn't you know? Fortunately, our route was entirely along the well beaconed channel, so between that and CMap, and the comforting reality that the depth on this stretch was such we could drop anchor anywhere if we had to, we were able to continue the thirteen miles to the waypoint we had off our friends Joe and Julie's resort outside of Labasa.

geodesic2 said...
WOW - too cool - the green flash - I have looked many - many times out over the gulf and never seen one - I just don't think we get them in this part of the world - too much polution - I am sure. Super adventure !!!!!!!!!
Bill C
s/vGeodesic2
June 16, 2007 at 10:41 PM
Post a Comment
<< Home
For older posts, see the Posts by Date
or Posts by Topic links in the upper left!
For our Australia posts starting in late 2008 see
Australia Blog