Friends Sites
sv Soggy Paws' Blog
sv Ursa Minor's Blog
Wednesday, June 20, 2007
16-18 June 2007 - Palmlea – Part 3 – The Queen’s Birthday Weekend
We woke to blue sky and a nice light breeze, the first pretty weather since our arrival. We decide today is the day to start stripping our cockpit teak. We have never been the most compulsive varnishers, (hence the mocha-colored paint on our caprails), and our abrupt departure from Savusavu last September interrupted any plans for a touch-up coat before cyclone season. So when we got back this year, our teak was looking pretty ratty. But it was too rainy in Savusavu to do anything about it. So I taped and Don scraped. Pretty much all day. I cooked up an authentic Rogan Josh curry, and we stayed up late watching "Bride and Prejudice," Jane Austen carried as a musical to India. Apropos to our location, and a real hoot! Go rent it!

Sunday was a rerun, except that about an hour after lunch we heard an ad on the radio for Father's Day! Ooops! We whip out the Iridium sat phone and call home to Morristown. It was, of course, Saturday in Indiana, but we hoped by our 'early' call we'd catch Don's brother visiting. We missed him by an hour. For some reason our connection wasn't the best, but the thought was registered!

Father's Day was apparently also overlooked up at Palmlea, where Joe put together another meal to tempt us off the boat – lamb chops on the grill, a different kind of Italian potato (Joe has a whole repertoire of neat potato recipes!), and a cabbage salad (not quite cole slaw!) I don't think any of their guests will ever starve. back aboard, we stayed up even later watching "The Devil Wears Prada," as far away from our setting as could be!

Fiji was a British colony from 1874 to 1970 (its flag still has the Union Jack in the corner), and there is still a nostalgia among some for the pre-independence days, so the Queen's birthday remains a holiday in these parts (in New Zealand and Australia, too!) After two days of hard work stripping the teak (mostly Don I confess), we decided to take a holiday too. 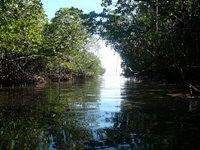 After a nice breakfast, we launched the inflatable kayaks and paddled eastward along the mangroves. I wasn't expecting much, except to admire the roots of a really mature mangrove forest, but we had some surprises. First we found the mouth of a stream that we could paddle up into. The stream wound like a tunnel through the trees, reminiscent of the river trip in Tenacatita, Mexico.

We went quite a ways before the current of the ebbing tide got too strong to paddle against. We imagine that this outflow comes from the estuary in front of the land we have been looking at to the west of Joe & Julie's.

Some way beyond the stream, we found a sand beach! Caramel colored, to be sure, but sand none-the less. A pretty spot, with tall trees and coconut palms behind it. 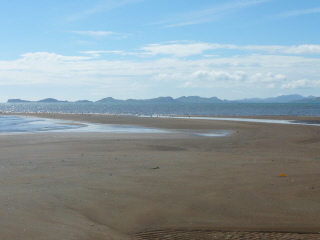 Then, rounding the point that is giving Tackless her protection, the coast opens up to huge Labasa Bay. Off the point is a complex, triangular sand bar uncovered by the falling tide. We got out and walked around, sometimes sinking 6-8" into the soft sand, out to the tip where a small flock of shorebirds and actual terns (we haven't seen much in the way of sea birds here) chattered to each other about the pickings. We felt so incredibly special to be all alone on such a remote spot…and turned around to see a young Indian man picking up crabs and stuffing them into a gunny sack! 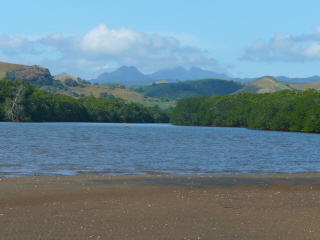 Where he materialized from we can't guess, but it is the way of this place. Whenever you feel all alone, look twice. Someone will come walking by! 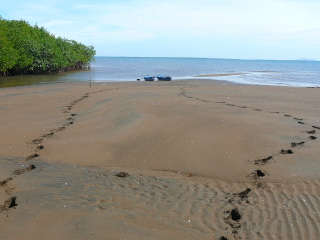 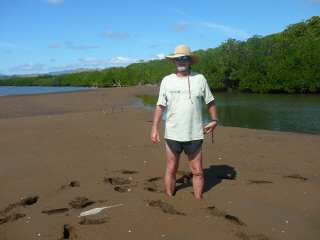 We were out paddling probably two hours, so we jumped in off the back for our first swim. The one flaw to this area is the water color. It is not especially inviting this close to the mangroves. It is not so much that the water is turbid, as the color of the bottom undermines any chance at blue. Still, it sure felt great.

Over lunch, just about the time I hung out a load of laundry on the line to dry, the clouds rolled in and the wind piped up and backed to the NE and North! Yikes, what's up? We have no protection on this side, so the boat started rocking and bobbing, to the point we picked up the dinghy and stowed stuff in case we had to make a run to hide behind one of the little offshore islets. Fortunately, by about five, the wind died down and went back E-ESE . The sky stayed threatening, even turning an ugly shade of purple, but that was as far as it went. The next morning, things went back to normal.

Written at 2:27 PM by Gwen and Don.
0 comments
0 Comments:
Post a Comment
<< Home
For older posts, see the Posts by Date
or Posts by Topic links in the upper left!
For our Australia posts starting in late 2008 see
Australia Blog