Friends Sites
sv Soggy Paws' Blog
sv Ursa Minor's Blog
Wednesday, June 20, 2007
19 June 2007 - Palmlea – Part 4 -- The Land Fantasy
Are you ready for this? Not one but both things we ordered Friday – the Yamaha propeller and the antenna for the cellular broadband card -- were actually in on Tuesday! I guess we should not be so surprised, because Fiji is not a country like America where businesses keep everything they sell in stock. In Fiji it's a regular thing to call Suva and have an order popped on the plane or ferry. Still we were both pleased as punch.

We rode around the rest of the morning with Joe and Julie as they did errands. Also more shopping. The one surprise Labasa held for us Tuesday was the sight of a red-hulled sailboat dropping their hook in Labasa River! We are not alone anymore! Unfortunately, they were too far away to hail and we couldn't see any name.

Back at Palmlea, low tide is now midday. This time we were prepared, and after lunch we donned our walking clothes and set out to explore "our"property. 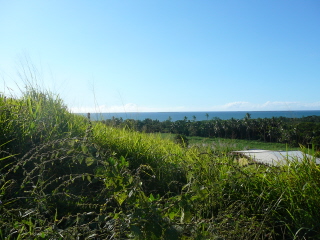 This property is about 15 acres to the east of Palmlea, on the other side of a ridge looking eastward over Labasa Bay. We had first heard about it over lunch with Joe and Julie in Savusavu last September the day before we flew back to the US, and we had first seen it on our May trip over by car, a brief handshake of a glimpse from the road. It is not in any real way "our" property, but it has gotten kind of convenient to think about it that way, and believe me, we have done plenty of thinking about it.

Do all cruisers, in the back of their minds, harbor the desire to find the perfect place to plant the anchor? I don't know, but some sure do. We have a number of cruising acquaintances who have put down new roots in one of the destinations they've traveled to by boat, among them Bonaire, Panama, Costa Rica, Mexico, Tonga, New Zealand and Australia. In Fiji alone, four separate boat crews we've known have become dirt owners! It doesn't always happen on the first go round. Sometimes they backtrack. Others buy as an investment or hedge for the future, and sail on. Back home, in the US, land has gotten so expensive, cruisers can't help but feel they have missed the boat! Additionally, the American urban and suburban landscapes are so congested and built up with the repeating patterns of chain businesses and housing developments, that returning cruisers, after years in the third world, just don't feel comfortable.

We feel all these things, and when we see a place like "our" property here in Fiji, our imaginations instantly flesh it out with a house – Fijian-style, of course like Nukubti or Palmlea – situated to the fabulous view, with a garden full of tropical fruits and veggies to the side, great rural walks out the back door, and inexpensive help. But even more we extend the fantasy to include long "summer vacation' visits by the kids, with Kai growing up – at least part-time – in a place he can run free, splash in the creek, built forts in the sugar cane (Fiji has no dangerous land critters!), and know early on that there other cultures and other perspectives in the world than those of white suburban America.

But these are OUR fantasies, inside our heads, and not a reality any of the players necessarily subscribe to. The REALITY of "our property" is that it is a long way away from our families, it is on the side of the Vanua Levu where there aren't many other "gringos" (I can never remember the Fijian word; I think it is ko'palangi) to socialize with (present company of Joe & Julie and their neighbors excepted), and quite frankly it is in a country with no infrastructure, little immediate hope of getting one going, and, indeed, is in the midst of a political coup! Such a deal, huh!

Still, with reason weighing heavily on our enthusiasm, we figured we are here now, and we might as well scope it out. 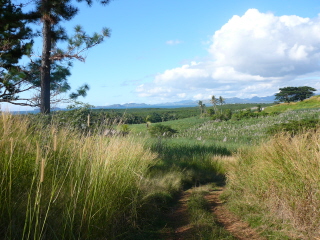 It's a pleasant walk from Joe and Julie's over the ridge (now owned by our former cruising compadres Greg & Sujata, Maaji Re) down across a stream (now dry) and up along the top of the next hill. I think I've already mentioned that the view east is to die for. Below the road, the cane field is nearing maturity. It stands about eight feet high and rustles in the wind. As we approached the house we were startled to see the slight figure of a youngish Indian man in a long blue coat with a machete in hand. This turned out to be Hussein, the owner (with his uncle) of the property. Hussein wants to sell, because he wants to follow the rest of his family to the big city of Suva.

Hussein led us on a tramp up the hill to show us where the southern (uphill) boundary was. This was good news because, were we to buy this land and build a house, we would want it as high as possible to maximize the view and the breeze. One might have to move the road down to run along the top of the cane field, but around here, a bulldozer would make light work of that. A house on the hill would put us a tad close to our neighbor, a retired policeman from Suva, but it definitely has the best view. 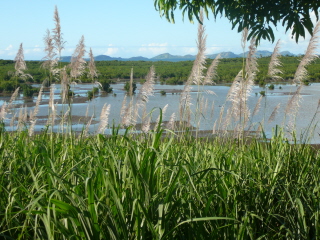 The boundary Hussein showed us ran from "the pine tree down the hill to the cow," perhaps not legalese, although I bet the official Fijian wording of the deed is not altogether so different. A survey is an important first step in this part of the world. One of Joe and Julie's neighbors on the other side had to move their house when the survey revealed the land they'd built on wasn't theirs after all! The cow, however, revealed that there was more land than we'd originally thought on the eastern edge. Hussein also confirmed that the stream we attempted to paddle up is the outflow of the big mangrove estuary at the bottom of the hill. He told us that there is a unique species of tasty fish in that estuary, found nowhere else in Fiji! 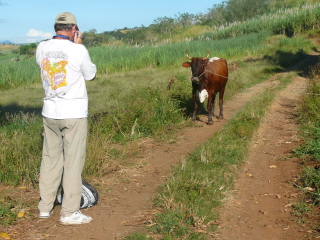 He also explained to us a bit about the cane crop, an attractive investment feature as the return on the cane (split between the land owner and the sharecropper) would amount to an annual return on the property value of about 7-10%. Most Fijian cane farmers no longer burn the fields as we saw in El Salvador for example, because they have been persuaded the quality of the crop is better without it. In El Salvador one of the main reasons to burn the field was to get rid of pests hazardous to the cane cutters like snakes and scorpions! Fiji doesn't have these, and since cane is another product considered a potential biofuel, cane is not a bad crop to have on your land.

After parting ways with Hussein we continued on down the road, past small houses and tethered cows, goats and dogs and a lot more cane. Eventually, the road loops back around to join the "main" road to Joe and Julie's about halfway back to the paved highway. Hussein had told us that the next village was about two kilometers further on. We didn't get that far. 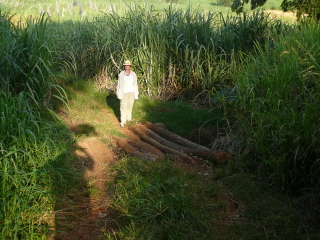 At a corner of two fields, we heard the most alien of sounds – a police siren. Also a roaring engine. Next thing we knew a car came hurtling around the bend with four guys in it. They grinned as they sped past us, gravel the size of golf balls flying! Several perplexed heartbeats later, here came the cops, siren blaring, after them. My, my, excitement in the burbs! We wondered whether they would turn off on any of the small lanes we'd passed, or whether they would keep on, cross the rickety log bridge and speed past Palmlea. (We later head that's exactly what they did, causing no end of excitement!)

It seemed a propitious time to turn around. We walked back to Hussein's, but before climbing back over the ridge to Joe and Julies, we turned off and followed a track through the cane down to the mangroves. We found the border of coconut palms, but the mangroves were pretty muddy from the recent new-moon tides, so we were unable to explore far enough to see the stream. One would have to cut a road through as Joe and Julie did to make any kind of water access feaasible. 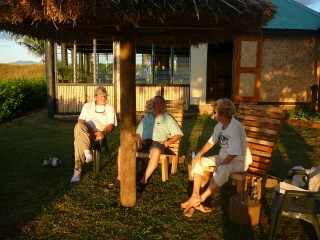 Have I mentioned Joe is a hell of a cook. He had been promising a Mexican dinner for days now, and tonight was the night. We helped ourselves to a shower in Bure #1, enjoyed a cocktail for sunset (I'm sticking to club soda!), and then indulged in as Mexican a meal as you could possibly imagine in this hemisphere: great salsa and chips, hearty beef enchiladas, and spicy refried beans. Don and I positively groaned as we schlepped our shopping down the hill in the dark to the dock. Portion control, Joe, Please! We're gonna burst!

geodesic2 said...
You still haven't said how much the 8 acres costs ????? Enquiring minds want to know. No bad land critters - great !!! Bugs that bite ??? Noseeums? Horseflies? Mosquitos? I guess I'll find out - will bring off and check book - start the negotiations with Heussein.
BillC
s/vGeodesic2
June 20, 2007 at 9:21 PM

Unknown said...
Gwen, nice postings. When you were in Navinggiri I could follow your every step on the google earth (maps). However not that high a resolution available where you are now.
What's a good email address for you now ?. Send me email if you can.
Dan K0TI (not sure you know about new call. changed from WR0DK)
June 21, 2007 at 7:27 AM
Post a Comment
<< Home
For older posts, see the Posts by Date
or Posts by Topic links in the upper left!
For our Australia posts starting in late 2008 see
Australia Blog